This Creamy Morel Mushroom Barley Soup is an easy and delicious way to get your mushroom fix in a healthy way. Can be made with either fresh or dried morel mushrooms.

Growing up both my maternal and paternal grandmothers made mushroom barley soup, both delicious but both uniquely different. One was more of canned mushroom soup plus barely the other was more homemade but with a little chicken bullion cheat.

Admittedly, I’m slurping down my 3rd bowl of Mushroom Barley soup and it’s only 2:30 pm. I made the first batching using white button mushrooms, using my Grandma Elsie’s recipe as a starting point but gourmeting-it up with dry white wine, homemade chicken broth, fresh thyme and heavy cream.

That first pot of creamy mushroom soup gave me the confidence to use up the last of the beautiful fresh morel mushrooms we picked over the weekend in another batch.

Nothing is worse than having a failed recipe that wastes the elusive morel mushrooms we work so hard to find or spend so much to purchase.

There are some slight differences between the way that I make mushroom soup with white button mushrooms vs wild mushrooms, mostly notably needing less mushrooms for comparable flavor punch.

I’ve since made yet a 3rd batch, instead of with fresh morels but with a combination of dried wild mushrooms we had in our pantry. So much YUM.

3 batches of soup and 3 bowls of soup in my belly I’m joyously typing out the recipe to share with you, happy day to me!

And I gotta brag, it’s really beautiful to look at too!!

Why add Barley to Mushroom Soup?

For many of you, Barley may be an unfamiliar ingredient. You may have heard of it in terms of brewing beer or if you are lucky, like me, have memories of it in your grandmother or great-grandmother’s pantry.

It’s one of the oldest cereal grains (aka Ancient Grain), it grows in varied climates and is an important staple in many traditional cuisines.

There are 2 types of barley you’ll find at your local supermarket; Pearl Barley and Barly Groats.

Unhulled Barley Groats are the whole grain while Pearl (hulled) barley has had the outer bran layer removed.

For this recipe we’re going to use Pearl (hulled) barley It’s inexpensive, readily available, and easy to cook, and it can be interchanged with rice in many dishes.

I have a love/hate relationship with grains as you probably already know. I’ve lived my life for many years being completely gluten free and nearly as long shunning all grains.

Barley does contain GLUTEN, so if you are sensitive, intolerant or allergic to gluten, barley must be avoided.

Barley is a whole grain that is packed with nutrients. It doubles in size when it cooks, so keep that in mind when reading the nutrition facts.

The main type of fiber in barley is beta-glucan, a soluble fiber that forms a gel when combined with fluid. Additionally, barley contains antioxidants such as vitamin E, beta-carotene, lutein and zeaxanthin.

If you tolerate gluten, Barley is a delicious & nutritious real food that I encourage you to try!

IMO the best way to describe barley is like a cross between brown and white rice only poofy. It has a very pleasant nutty flavor that is widely adaptable.

When it’s cooked in a soup like this, it creates a starch thickened light gravy texture similar to risotto where the grain/starch assumes to flavors you cook it with.

Now that I’ve gotten you familiar with my beloved barley, I’m sure you’re eagerly ready to make a pot of this creamy morel soup!

Here are a few related healthy mushroom soup recipes you might enjoy: 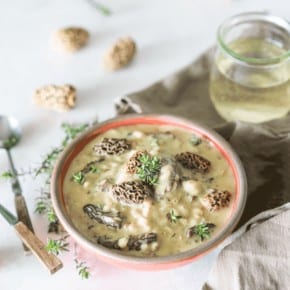 This Creamy Morel Mushroom Barley Soup is an easy and delicious way to get your mushroom fix in a healthy way. Can be made with either fresh or dried morel mushrooms.
Print Pin Facebook
Prep Time: 5 minutes
Cook Time: 50 minutes
Servings: 4 servings 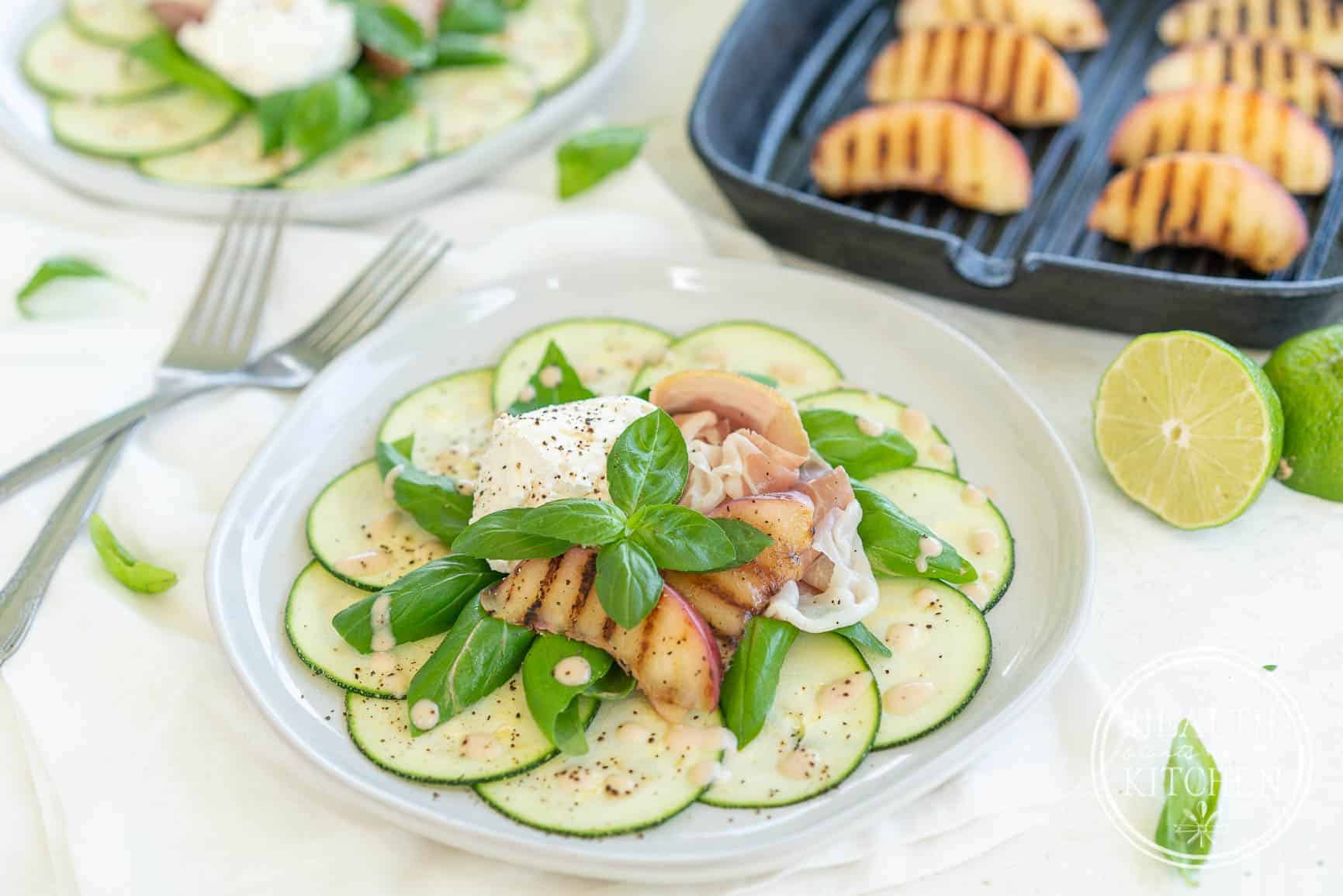 Grilled Nectarine Salad with Burrata, Prosciutto and Basil is like summer on a plate. Grab all the fresh produce at your local farmers market and be prepared to fall in love with your new favorite salad! 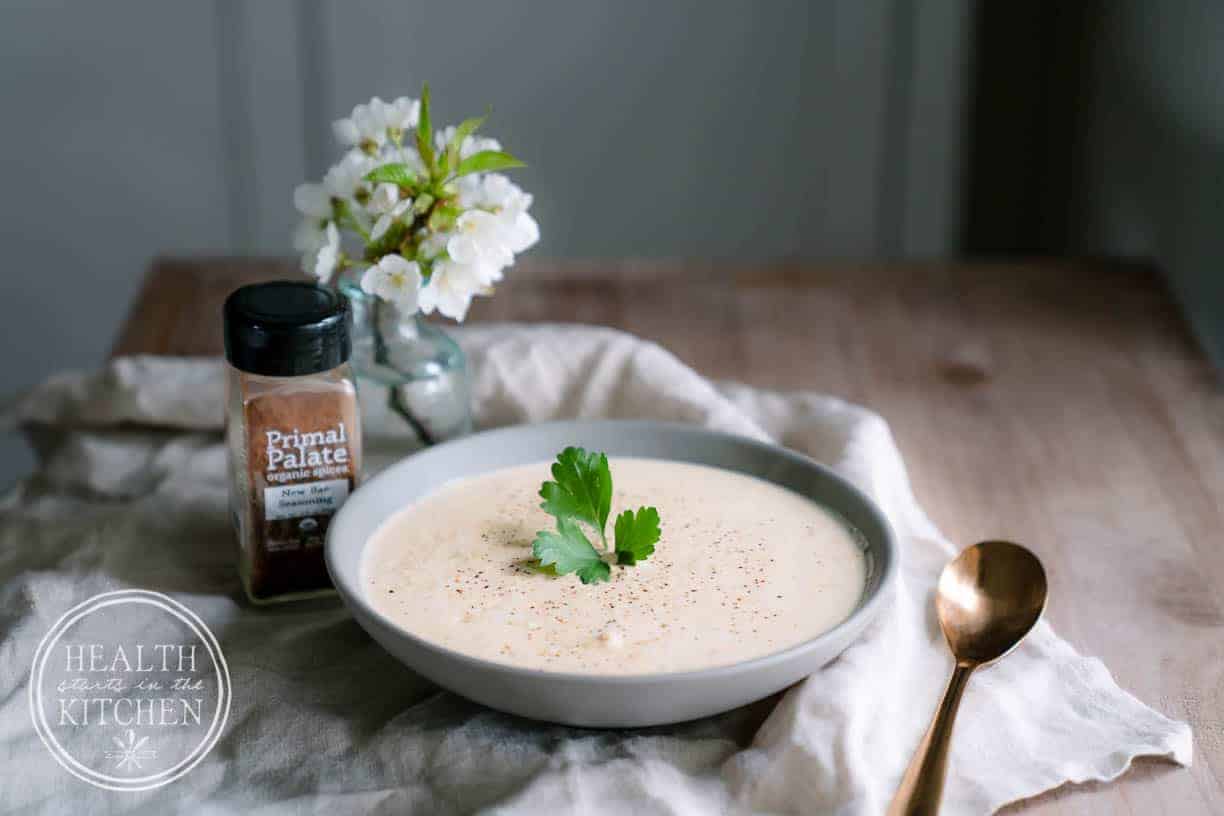 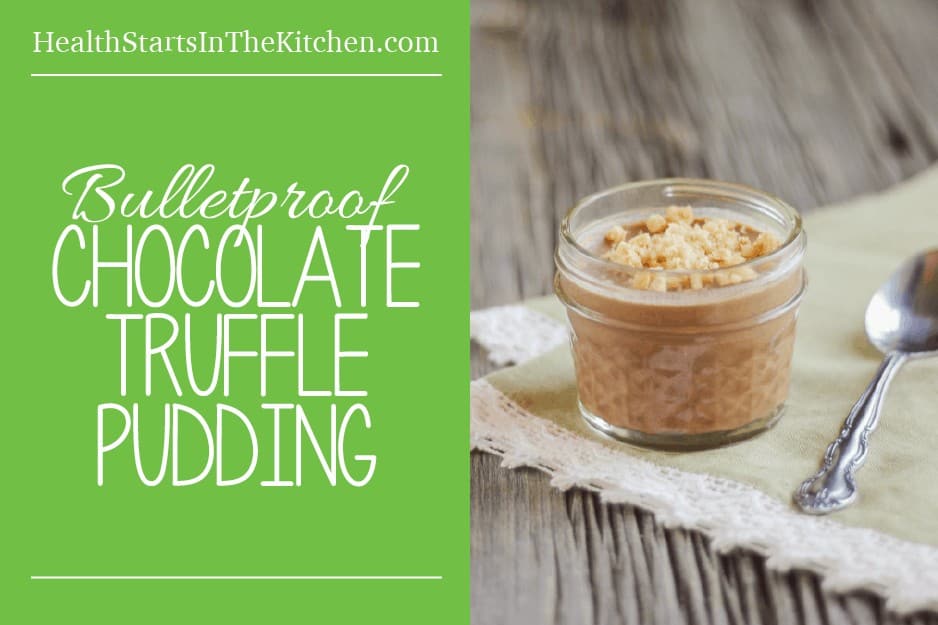 “Why would you ever go off a diet that tastes better than the diet you were eating before you started looking great, losing weight, and kicking ass?” That’s the question my good friend Dave Asprey asks in his just-released new book, “The Bulletproof Diet”…which I’m totally in LOVE with and even Hercules couldn’t wait to sink… 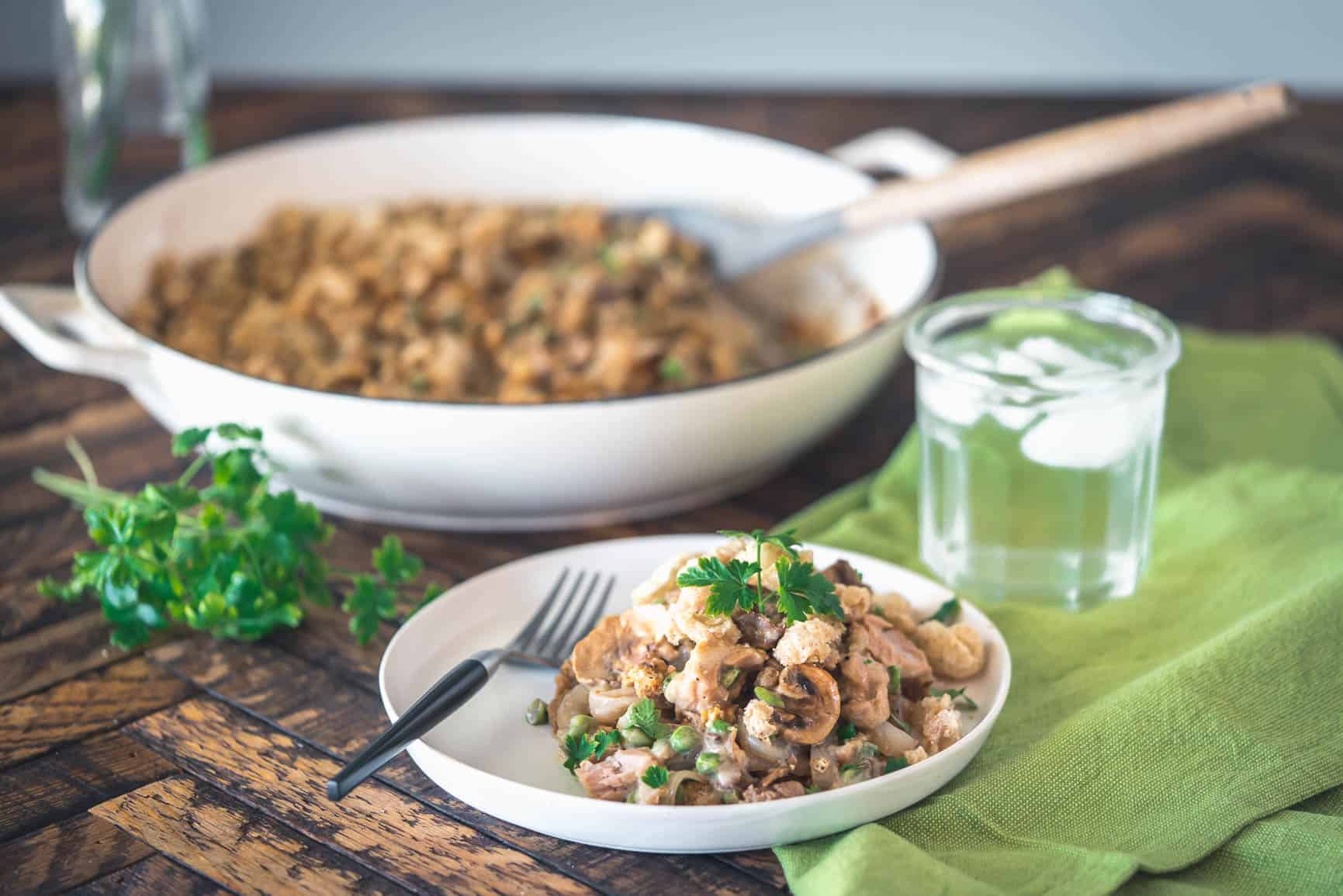 Tuna Noodle Casserole, the quintessential American dish. But traditionally its’ made with gluten, dairy and processed foods, YUCK!  However, with my Keto Diary-Free Tuna Noodle Casserole you get all that savory comfort food that you’re craving but not sabotaging your healthy diet. AND the best part is that the entire recipe is made using  REAL FOOD ingredients from your PANTRY! 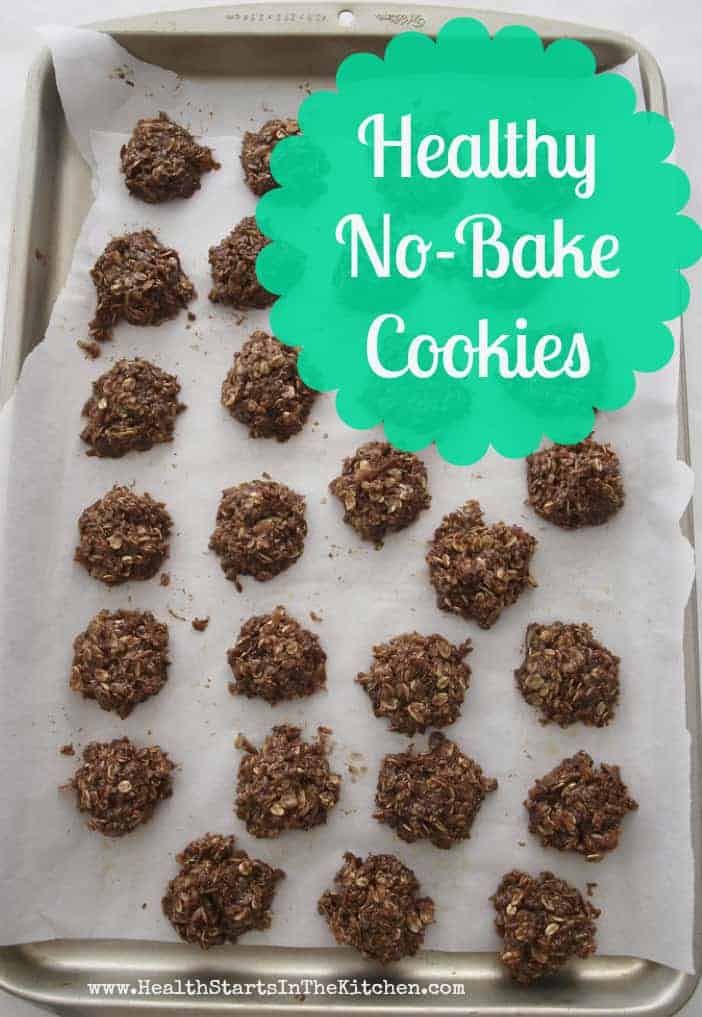 I’ve always loved Peanut butter and Chocolate No Bake Cookies, but haven’t had them in years… but with a few minor changes I can now enjoy them without guilt!! These are made with all natural ingredients and are so much healthier!! These are Diary, Gluten, Soy, Corn Free! 3/4c Coconut Sugar 1/4c Coconut Milk 1/4c… 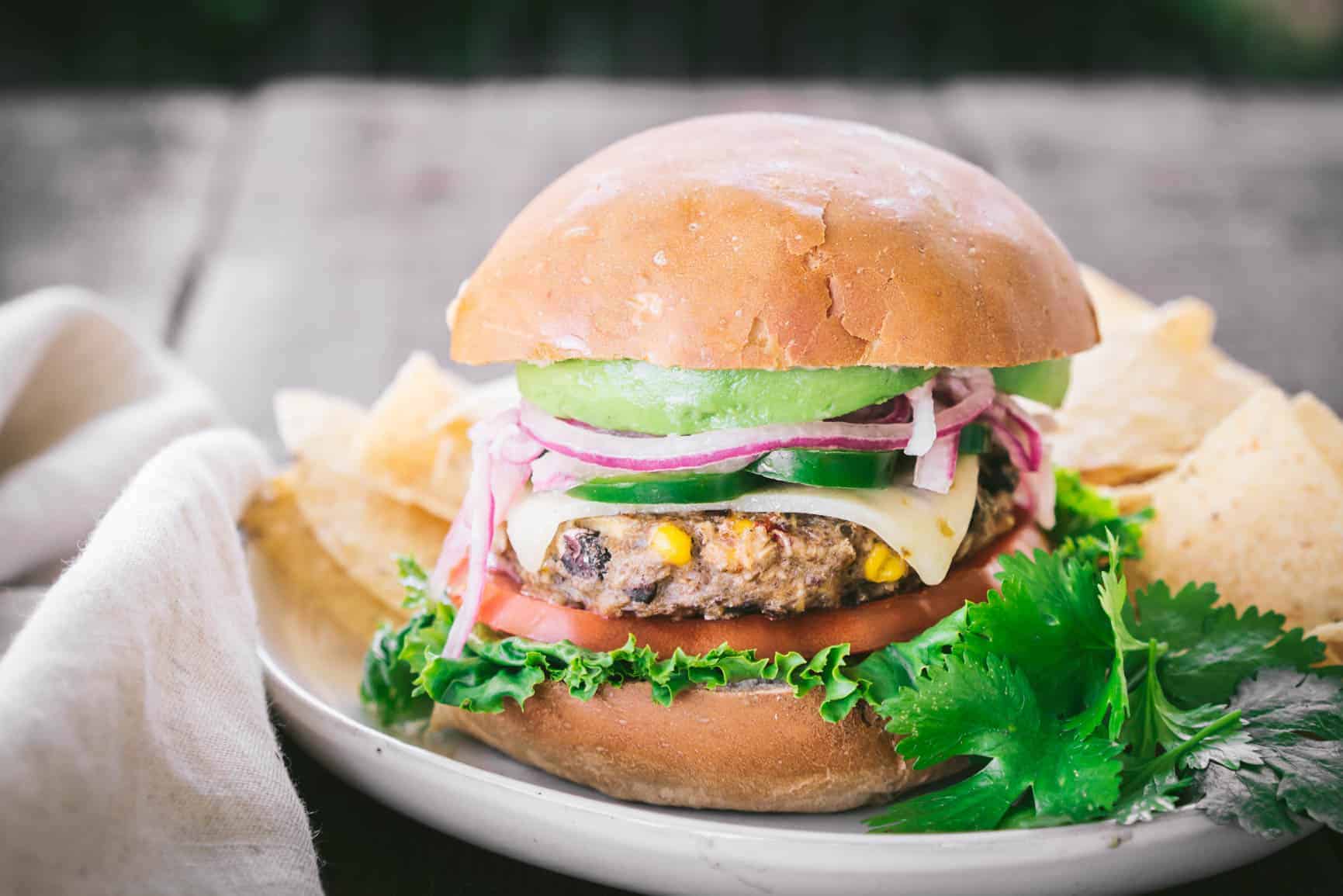 Healthy eating comes in a wide variety of focuses. The one thing that generally we can all agree on is that vegetables play an important roll and in most people’s health, adding a little extra is always a good idea! So, whether you’re a vegetarian looking for burger alternative OR looking for a delicious option for your family/friends, don’t worry I’ve got you covered; I’m sharing my secret to making the Ultimate Vegetarian Burger with you today!