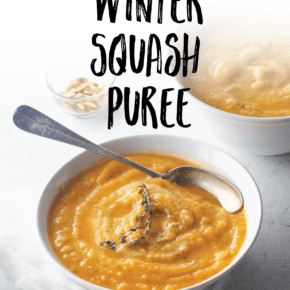 Our favorite things about the weather getting colder as summer comes to an end, is making my Easy Winter Squash Puree Recipe! It’s the healthier cousin of traditional mashed potatoes and sweetness is a delicious way to enjoy the fall harvest. It’s hare to believe that with so few ingredients, something can taste so good.

When one door closes, another opens. Although the fall signifies the end of warm weather and fresh picked tomatoes, it is the beginning of Winter Squash Season!!

We love the combination of this sweet puree with my Pressure Cooker Braised Beef Short Ribs or as a side dish to THIS delicious Grain Free Meatloaf!

Winter squash is a summer growing annual pant, representing several squash species. It differs from summer squash in that it is harvested and eaten in the mature fruit stage, when the seeds within have matured fully and the skin has hardened into a tough rind. At this stage, most varieties of this fruit can be stored for use during the winter. It is generally cooked before eating.

Winter squash, especially the darker-fleshed varieties, such as pumpkin and acorn, provide exceptional amounts of carotenes. Like other carotene-rich vegetables, winter squash has been shown to exert a protective effect against many cancers, particularly lung cancer. In addition to cancer and heart disease, diets rich in carotenes also appear to offer protection against developing type-2 diabetes, with pumpkin consumption being the most protective. Pumpkin seeds have also been shown to be helpful in reducing symptoms of benign prostatic hyperplasia (BPH).

There are many varieties of winter squash, too many to list and describe each individually. But, don’t worry, I’m going to cover the most common winter squashes you’ll find at your local farmers market. When in doubt ask the farmer for some help identifying what varieties of squash they have available, most often they can even give you cooking suggestions!

Easily found in supermarkets. As the name suggests, this winter squash is small and round shaped like an acorn. One of my favorite baking squashes, it is easy to slice into halves and fill with butter. A small acorn squash weighs from 1 to 3 pounds, and has sweet, slightly fibrous flesh. Its distinct ribs run the length of its hard, blackish-green or golden-yellow skin. In addition to the dark green acorn, there are now golden and multi-colored varieties. 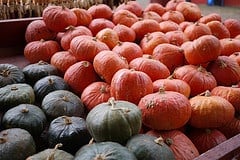 A relative of the buttercup squash that resembles a small pumpkin with orange skin. Bright orange flesh has a dry sweet taste. Peel it, cube the flesh, roast it, and serve like cut-up sweet potatoes. Has an extraordinarily long storage life. 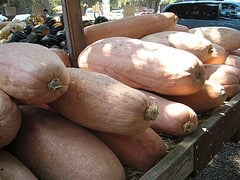 In shape and skin color, this winter squash is reminiscent of a banana. It grows up to two feet in length and about six inches in diameter. Its bright orange, finely-textured flesh is sweet. Banana squash is often available cut into smaller pieces. 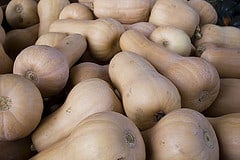 Easily found in supermarkets. Beige colored and shaped like a vase or a bell. This is a more watery squash and tastes somewhat similar to sweet potatoes. It has a bulbous end and pale, creamy skin, with a choice, fine-textured, deep-orange flesh with a sweet, nutty flavor. Some people say it is like butterscotch. It weighs from 2 to 5 pounds. The oranger the color, the riper, drier, and sweeter the squash. Butternut is a common squash used in making soup because it tends not to be stringy. 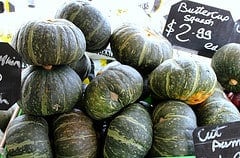 Buttercup Squash are part of the Turban squash family (hard shells with turban-like shapes) and are a popular variety of winter squash. This squash has a dark-green skin, sometimes accented with lighter green streaks. Has a sweet and creamy orange flesh. This squash is much sweeter than other winter varieties. Buttercup Squash can be baked, mashed, pureed, steamed, simmered, or stuffed and can replace Sweet Potatoes in most recipes. 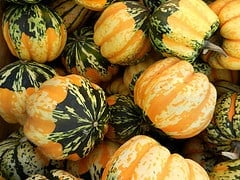 Cream colored with orange spots or pale green with dark green spots in vertical stripes. Carnival Squash have hard, thick skins and only the flesh is eaten. It is sometimes labeled as a type of acorn squash. The delicious yellow meat is reminiscent of sweet potatoes and butternut squash and can be baked or steamed then combined with butter and fresh herbs. Also great in soups. 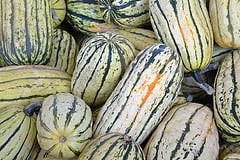 Also called Peanut squash and Bohemian squash. This is one of the tastier winter squashes, with creamy pulp that tastes a bit like corn and sweet potatoes. Size may range from 5 to 10 inches in length. The squash can be baked or steamed The thin skin is also edible. The delicata squash is actually an heirloom variety, a fairly recent reentry into the culinary world. It was originally introduced by the Peter Henderson Company of New York City in 1894, and was popular through the 1920s. Then it fell into obscurity for about seventy-five years, possibly because of its thinner, more tender skin, which isn’t suited to transportation over thousands of miles and storage over months. 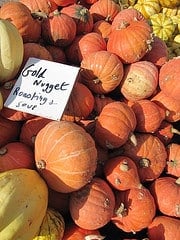 A variety of winter squash, which is sometimes referred to as an Oriental pumpkin that has the appearance of a small pumpkin in shape and color. It ranges in size from one to three pounds. Golden nugget squashes are small, weighing on average about 1 pound. Both the skin and the flesh are orange. Gold Nugget Squash may be cooked whole or split lengthwise (removing seeds). Pierce whole squash in several places, and bake halved squash hollow side up. 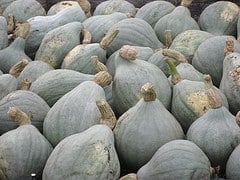 The extra-hard skins make them one of the best keeping winter squashes. These are very large and irregularly shaped, with a skin that is quite “warted” and irregular. They range from big to enormous, have a blue/gray skin, and taper at the ends. Like all winter squash, they have an inedible skin, large, fully developed seeds that must be scooped out, and a dense flesh. Hubbard squash is often sold in pieces because it can grow to very large sizes. The yellow flesh of these tends to be very moist and longer cooking times in the oven are needed. They are generally peeled and boiled, cut up and roasted, or cut small and steamed or sautéed. It’s perfect for pies. Hubbard squash, if in good condition initially, can be successfully stored 6 months at 50 to 55 degree F. with 70% relative humidity. Less rot will develop in the Hubbard squash if stems are completely removed before storage. Hubbard squash and other dark-green-skinned squashes should not be stored near apples, as the ethylene from apples may cause the skin to turn orange-yellow. 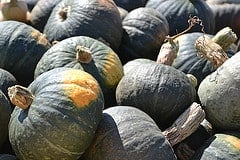 Kabocha is the generic Japanese word for squash, but refers most commonly to a squash of the buttercup type. This squash has a green, bluish-gray or a deep orange skin. The flesh is deep yellow. (Also known as a Ebisu, Delica, Hoka, Hokkaido, or Japanese Pumpkin) Kobocha Squash may be cooked whole or split lengthwise (removing seeds). It has a rich sweet flavor, and often dry and flaky when cooked. Use in any dish in which buttercup squash would work. 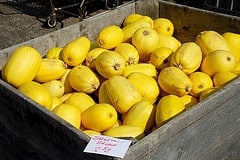 A small, watermelon-shaped variety, ranges in size from 2 to 5 pounds or more. It has a golden-yellow, oval rind and a mild, nutlike flavor. (Spaghetti Squash is the only variety of winter squash I don’t recommend using for a puree) The yellowiest Spaghetti squash will be the ripest and best to eat. Those that are nearly white are not very ripe. Although it may seem counterintuitive, larger spaghetti squash are more flavorful than smaller ones. When cooked, the flesh separates in strands that resemble spaghetti pasta.

To prepare spaghetti squash, cut the squash in half lengthwise and remove the seeds. Then bake or boil it until tender. Once cooked, use a fork to rake out the “spaghetti-like” stringy flesh (all the way to the rind), and serve. Spaghetti Squash can be stored at room temperature for about a month. After cutting, wrap in plastic wrap and refrigerate up to 2 days. Spaghetti squash also freezes well. 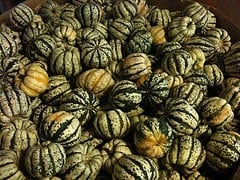 This small, mildly sweet-tasting squash resembles a miniature pumpkin with its top pushed in. It has cream-colored skin with green specks. Weighing only about 7 ounces, it has sweet and tender orange flesh and is a great size for stuffing and baking as individual servings. Sweet dumplings are tiny but great for roasting and presenting whole. 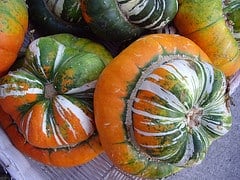 Named for its shape. Turban Squash has colors that vary from bright orange, to green or white. It has golden-yellow flesh and its taste is reminiscent to hazelnut. Has a bulblike cap swelling from its blossom end, come in bizarre shapes with extravagant coloration that makes them popular as harvest ornamentals.

It is popular for centerpieces, and its top can be sliced off so it can be hollowed and filled with soup. A larger variety of the buttercup squash, the turban has a bright orange-red rind. Its flesh and storage ability are comparable to the buttercup squash. Use in recipes that call or pie or sugar pumpkin.

When in doubt if it’s available in the fall or winter and looks like a squash don’t be afraid to give it a try. Generally speaking all winter squashes can be used interchangeable, with the exception of spaghetti squash.  As you can tell in the picture above, they all look similar when you get inside.

How to Store Winter Squash:

Wash the exterior of the squash just before using. When water is used in cooking the squash, the quantity of water should be kept to a minimum to avoid losing flavor and nutrients, steaming is preferred over boiling. Peeling: Because this rind makes most squash difficult to peel, it’s easier to cook the unpeeled squash, and then scoop out the cooked flesh. Although many recipes do require peeling (and cutting) prior to cooking, use a vegetable peeler to remove the skin. (peeling can be done before or after cutting the squash in half) Cutting: Winter squash have a hard skin and flesh (except delicata), you’ll want to be extra careful not to cut yourself. To cut winter squash in half, grasp the squash firmly and use a sharp knife to slice through to the center, lengthwise. Then flip and cut the other side until the squash falls open. Remove and discard the seeds. I prefer to cut the top and bottom ends off first, it seems to make it easier to cut open. Remove the Seeds: Using a spoon, scoop out the seeds and other stringy membranes. Don’t thow away those seeds, you can clean them up and use them. Click HERE for how to cook squash seeds.

How to make Winter Squash Puree

Most often winter squash is prepared by roasting, baking or steaming. For a puree you’ll want to start by cutting your squash in half and scooping out the seeds

Then peel off the rind/skin using a vegetable peeler. 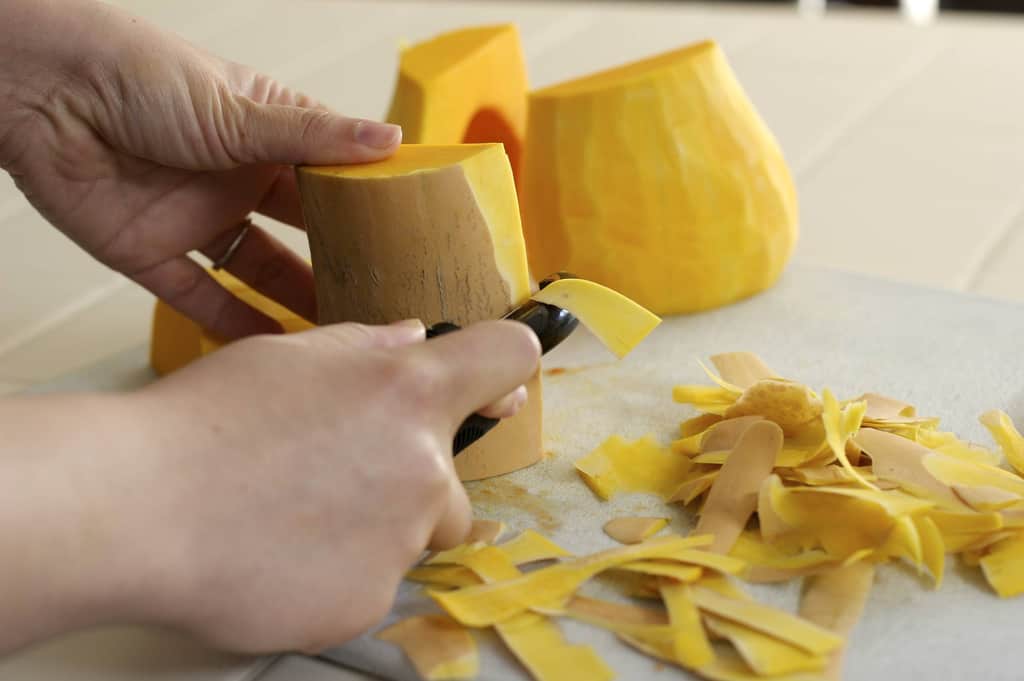 Then cut your peeled squash into 1 inch cubes 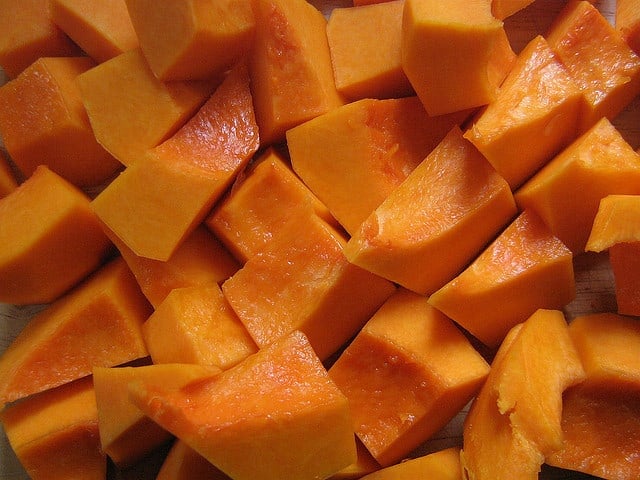 You’ll want to steam your squash for about 20 minutes, or until fork tender. Then transfer to your blender along with butter, sea salt and fresh ground black pepper. 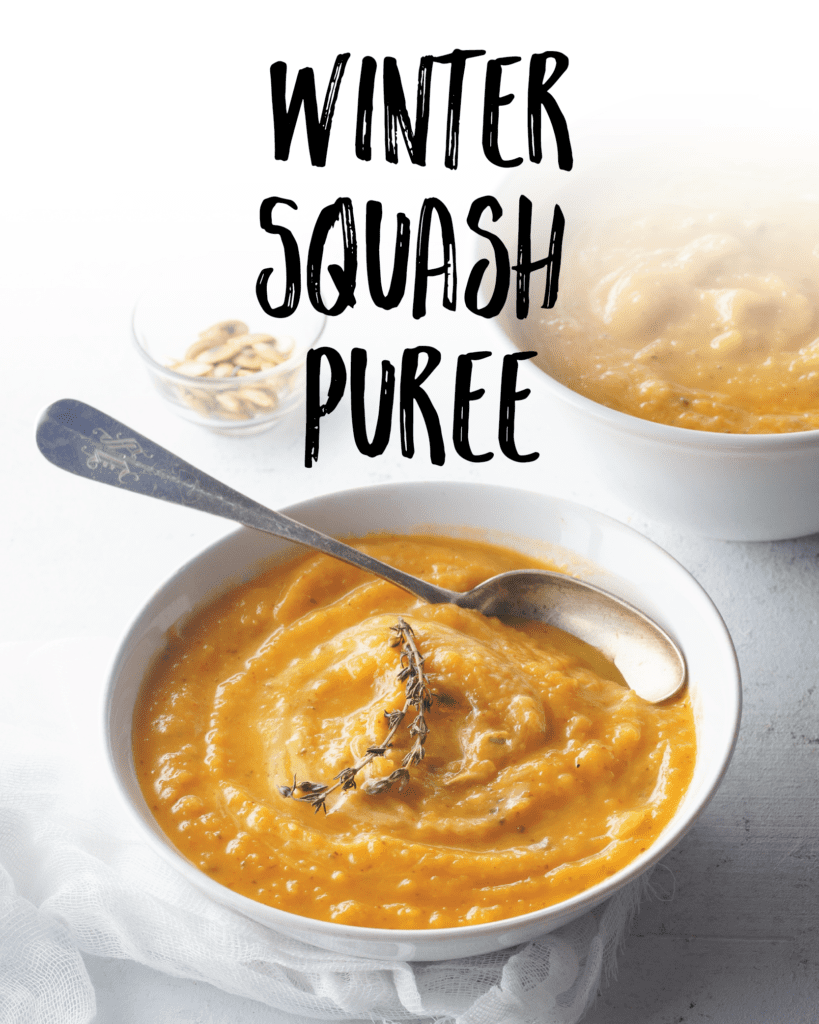 You won’t need any other liquid, trust me. Blend until completely smooth, taste and season with additional butter, sea salt and pepper to taste. (of course I recommend using a Vitamix Blender for the best results!)

Our favorite things about the weather getting colder as summer comes to an end, is making my Easy Winter Squash Recipe! It's the healthier cousin of traditional mashed potatoes and sweetness is a delicious way to enjoy the fall harvest. It's hare to believe that with so few ingredients, something can taste so good.
0 from 0 votes
Print Pin Rate
Course: Side Dish
Cuisine: American
Prep Time: 10 minutes
Cook Time: 30 minutes

Tried this recipe?Mention @HealthStartsinthekitchen or tag #HealthStartsInTheKitchen!
« How to keep homegrown potatoes for winter and beyond
Homemade Ranch Dressing Mix »

Hayley Ryczek is the voice of popular healthy cooking and natural lifestyle ... END_OF_DOCUMENT_TOKEN_TO_BE_REPLACED 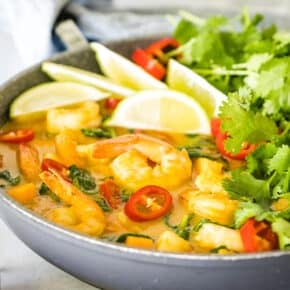 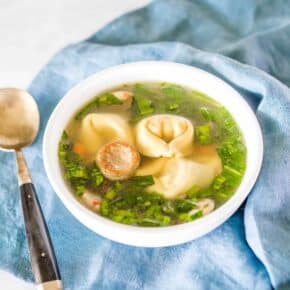 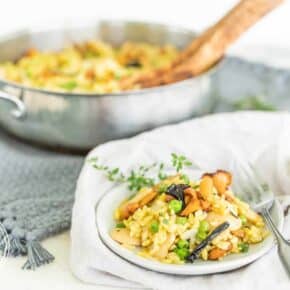 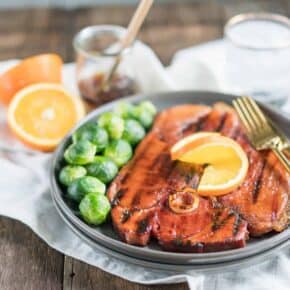 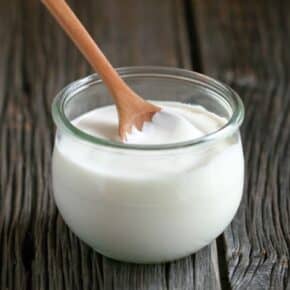 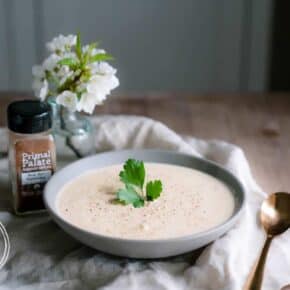